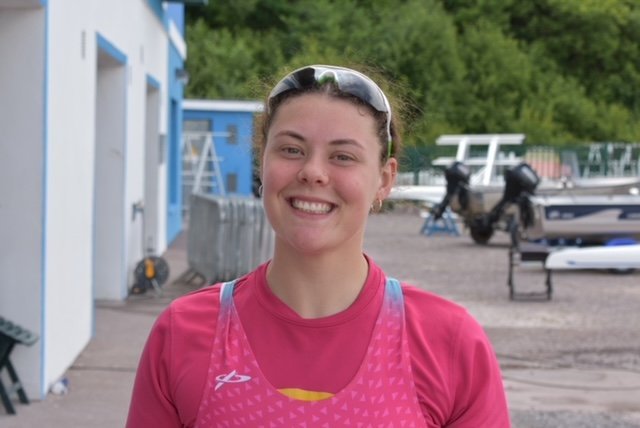 Alison Bergin of Fermoy laid down quite a marker as she won the semi-final of the single sculls at the World Under-23 Championships in Varese in Italy today.

On the first day of the Championships, Alexandra Foester of Germany blew the field away in the heat. It was to be expected: the German had come to the event after winning at Lucerne World Cup. Bergin finished fourth.

Bergin went on to win her repechage and qualify for the semi-final – only to draw Foester again. The Irishwoman, in lane six, started very well and led at 500 metres. Foester, in the middle of the course, took over in the lead by 1500 metres, with Bergin seemingly battling with Spain and Switzerland to secure the top-three spot that would take her to the final.

But then the Cork sculler wound up and launched into a remarkable drive for the line. She left the Swiss and Spanish scullers behind – and passed Foester.

Bergin’s time (7 min 24.89) was by far the faster winning time in the semi-finals and a World Championship best time – beating the time set by Foester in the heat. Dovile Rimkute of Lithuania won the first semi in 7:33.39. The final is set for 5.17 (Irish time) on Saturday.

Earlier, the Ireland men’s double of Ciarán O’Sullivan and Fergus Brice lost out on qualifying for the semi-finals by a tiny margin in the World Under-19 Championships.

In by far the best of the quarter-finals, Germany started brilliantly and were not to be headed. Croatia stayed in touch, with Ireland and the United States battling for third. At 1200 metres Ireland took over in third and then pushed on, looking set to take second. But in in the scramble for the line, the US and Croatia drove into second and third – the margin between Croatia in third and Ireland in fourth was just .24 of a second.

Ireland’s time would have qualified them in all three of the other quarters – and would have won two of them.