Four Medals for Ireland at World Under-23 Championships 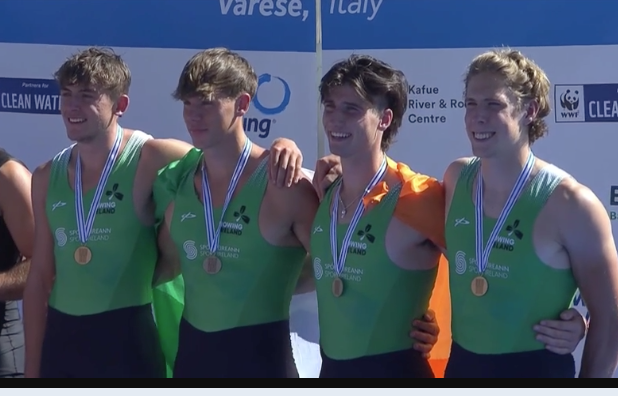 Another remarkable day for Irish rowing. In little more than an hour at a major championships, Ireland contested four finals and landed four podium finishes.
Brian Colsh of NUIG and Konan Pazzaia started the run at the World Under-23 Championships in Varese with a bronze in the men’s double. Ireland were in fifth at halfway, with Moldova and Belgium contending at the head of the field. But then Ireland moved – and fast. They took out Germany and were challenging Moldova for silver coming to the line, as Belgium took gold.
Ireland quickly added a second bronze medal through the men’s four. The crew of Adam Murphy, Nathan Timoney, Andrew Sheehan and John Kearney (pic, courtesy WorldRowing) were never out of the running for a medal, holding third behind Britain and New Zealand in a leading group which formed early. Ireland pushed hard to up the colour of the medal, but the order stayed the same on the line.
The lightweight men’s double of Ciarán Purdy and Hugh Moore well deserved their silver. Again the work was done in the middle stages of the race. Spain were leaders early on, but as Italy moved into the gold medal spot, Ireland took over in second. The two Queen’s University men then hunted down the host nation, but Italy upped their race to 43 strokes per minute and thrilled their supporters with the win.
The women’s single sculls gave Alexandra Foester the chance to show what a good racer she is. The defending champion and gold medallist from the World Cup in Lucerne this month could only take second to the fast-finishing Alison Bergin in the semi-final, but the German gave no chance to the woman in green in the final. Foester was supreme and won well. Bergin, who had been solidly in third through the race, closed hard on Aurelia-Maxima Janzen of Switzerland coming to the line but could not quite catch her.
The session of finals had been brought forward because of concerns about the weather.
In the Junior 19 World Championships, Ireland’s Holly Davis and Anna Keating qualified for the A Final. The Netherlands won this semi-final with an imperious display. Ireland, who had been fifth after 500 metres, came through the middle stages with real intent, edging into third by 1,000 metres. They pushed passed Lithuania and France and up on the Dutch, who were not to be beaten. France took third.
This was the slower of the semi-finals – indeed, Greece set a new World Best Time in the other semi-final. They were followed in by Germany and Italy – all inside the winning time in Ireland’s semi.
The Greek crew is young: Styliani Natsioula is 17, Sofia Dalidou is 16.
The Ireland junior quadruple had hopes of making the A Final, but their semi-final got away from them. Britain, the United States and Poland got a firm hold on the top three places, while the young Ireland crew remained stuck in fifth.
They will contest the B Final on Sunday (9.55 Irish time), while the junior men’s double is in action in the C Final (9.15) . The women’s double A Final is scheduled for 12.40.