Fun and Teamwork Carried Us Through Says Atlantic Record Breaker 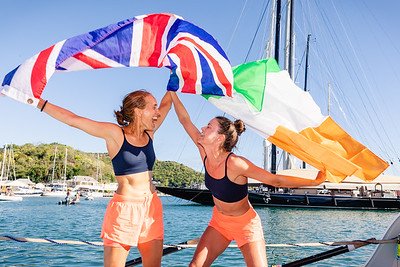 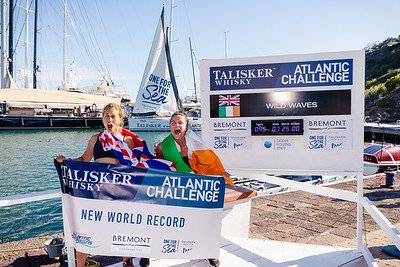 Jessica Oliver and Charlotte Harris are the fastest female pair to row across the Atlantic. When they landed in Antigua after the 3,000 nautical mile row in the Talisker Whisky Atlantic Challenge, their time of 45 days, seven hours and 25 minutes had shattered the old record. The other striking thing about the Irish/British crew is that in virtually every image of them before and after the gruelling trek they look happy.

“The only way we got through the whole thing was humour!” Limerick native Jess says in a call from Antigua. “Even when things were going really, really wrong, we had to laugh at it, because if we didn’t laugh, well …

“You couldn’t let yourselves have negative thoughts, because it could kind of get on top of you a bit. [Charlotte] has been my best friend for 10 years; to deal with everything we just laugh about it. We couldn’t be down!”

“We capsized. Both of the cabins got flooded with sea water. The cabins were like a safe haven – when you come off the oars you could close the hatch and go, right, I’m just going to sleep. I can feel a bit more comfortable.

“So, when the sea water came in the whole boat was uncomfortable. The most comfortable place was on the oars. You couldn’t get away from the fact that everything was sticky and salty. I remember opening the hatch one day and looking at Charlotte. We were both so uncomfortable that we just burst out laughing. It was the only way through it: ‘this is just ridiculous now’!

“And then you just get on with it. You say ‘how can we make the situation more comfortable, what can we do?”

They tore the covers off the seats, but they wouldn’t dry out; they ripped up clothes to cover the foam.

“We made it work, but looking back now, you think: ‘how did I live like that for the best part of a month?’”

Their remarkable progress across the Atlantic – five days faster than any previous female pair – had drivers beyond their ability to make light of adversity. Their friendship is one of two combative women.

“We had no business being that good. Number one, we are both unbelievably determined, very competitive (and) not just with the rest of the race, but with ourselves.

“Every two hours when we were on the oars we had a kpi [key performance indicator]. We wanted to make five miles. If we didn’t make it we’d give ourselves such a hard time.

“The successful criteria was, at first, to be the first in the team in pairs. Then that changed: we wanted to be the second in the pairs, because there was a men’s team ahead of us we knew we weren’t going to catch.

“When we realised the world record was in our sights, we just became militant with it. We went for it; we pulled. The weather was [by then] on our side and we would set targets [like] ‘we must do seven miles’. And we kept making it. We had real motivation and we had a target to hit every two and a half hours. We would check had we hit the target. Have we banked something if there is bad weather?”

Along with determination, teamwork and compassion were core factors.

“We would always look after each other. We’d be making each other meals. I’d go into Charlotte’s cabin if she was having a bad day and I’d make it nice and tidy for her. And vice versa, she’d do the same for me.”

Jessica grew up in Corbally in Limerick (she studied at Scoil Íde and played camogie there) and Cheltenham. She met Charlotte first when the two were studying at Cardiff University almost a decade ago. They both moved on to business courses with success, and Charlotte is a procurement manager with Guinness-owners Diageo, and this is where she came across the Talisker Whisky brand and the race it sponsors.

“She roped me into it!” Jessica says. After a spell with Chanelle Pharmaceuticals in Galway, Jess had moved on to do an MBA in Imperial College Business School and is now a consultant.

Though they both played hockey in college, they were not rowers.

“In a weird way it stood us in good stead [in the ocean race]. Anyone who gave us advice we’d take it. It wasn’t like [we would say] ‘oh we know about that, or we don’t have to do that because we know x, y or z’.

“We took every piece of advice from wherever it came and pulled it into one big learning matrix. We had no airs or graces – we just knew nothing.”

Jessica was an athlete when she was younger and had competed in triathlons. In 2019, with Charlotte, she took part in a charity boxing match. They trained for three months.

“We had our fight night and we raised money for charity. After that we thought, ‘now we’re going to do something’.”

Their sense of fun is evident in the videos they did for their chosen charities for the race, Shelter and Women’s Aid, and Jessica thinks it might be a reason why some people did not take them seriously in the race as ocean rowers.

“You don’t have to be serious to take something seriously,” she says, referring to Paul O’Donovan and Gary O’Donovan as proof than you can have fun and be seriously competitive.

Jess Oliver has strong family links to Cork and is particularly pleased that a school in Cork has been following the row and she hopes to make presentations to them.

Women’s Aid and Shelter will be big winners. Charlotte and Jess set out to raise £100,000 (€120,000) and they are already well on the way – the figure may be exceeded. The clincher should be a charity ball in London in May. “I think that’s what’s really cool,” Jessica says.

The whole thing is cool, I say.

She laughs. It’s a winning sound.