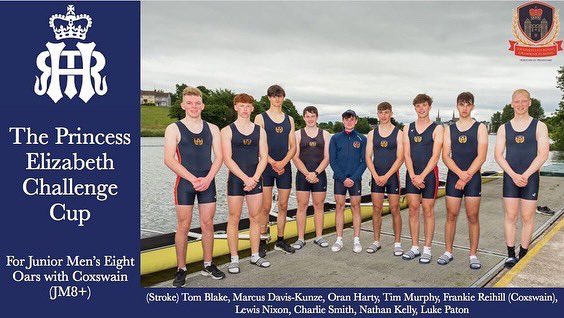 Two selected (seeded) Irish crews were amongst three to progress with ease on the first day of Henley Royal Regatta. The men’s fours from Commercial and Shandon looked impressive and the draw and their competitive qualities could see them all the way to the weekend. Enniskillen’s boys’ eight (pictured, courtesy HRR/ERBC) also won well, but the next round of the Princess Elizabeth pits them against champions Eton.

Queen’s and Methody made their exits in the Temple and Fawley.

The weather was cool all day, but the morning was particularly windy.  Commercial’s coxed four in the Britannia made light of this. They had the Berkshire station and took the lead early against Elizabethan Rowing Club. Apart from some urgings by the umpire to keep them in their lane, they were in command. They won by three lengths.

Shandon’s men’s four were similarly emphatic in their win in the Wyfold Cup for club crews. Cantabrigian’s steering was wayward and they made a poor start; the men from Cork made good use of their Berkshire station, keeping a steady, straight course and winning a one-sided encounter.

Enniskillen Royal Boat Club were completely in command in their heat against 1863, a club which has grown from the old boys club of The Oratory School. Defending champions Eton won their heat in a better time; the clash of the two will be a big test for the Fermanagh club.

Queen’s fell behind University of London B right from the start in the Temple Cup for men’s student eights. The strongly-built London crew, on the Buckinghamsire station, made a big effort to take the early lead. Once they had achieved this, they led through the main markers and had clear water at the end.

Methodist gave it a good lash in the Fawley for junior men’s quads. After reasonably good starts for both crews, the Tideway Scullers’ School moved into the lead, but the Belfast boys stayed at it, even as the impressive young Londoners swept to their win.