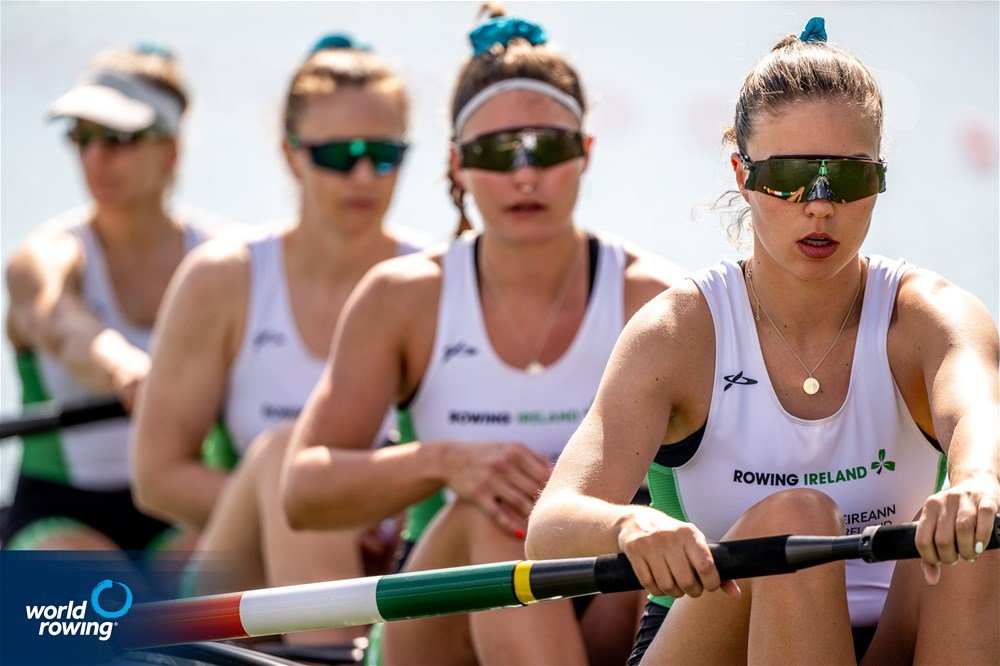 Four medals added to the two won on Saturday made it a great Sunday for Ireland at the World Cup Regatta in Poznan, Poland.

The silver amongst the three bronze medals came in the women’s double scull. Sanita Puspure and Zoe Hyde raced very well. The 40-year-old former world champion in the single and the debutant 25-year-old showed great cohesion. Roos de Jong and Laila Youssifou of the Netherlands looked uncatchable from early on, with Ireland grabbing hold of second and not letting go, despite pushes by China and US One, who took bronze.

Emily Hegarty and Fiona Murtagh, who were part of the Ireland four which took bronze at the Olympic Games, also took bronze in the pair in Poland. At the head of the field, the United State One and the Netherlands engaged in a battle for gold, with the Dutch winning. Hegarty and Murtagh got out in front of the rest and took a clear third place.

The women’s four of Natalie Long, Aifric Keogh, Tara Hanlon and Eimear Lambe (pic) had to work hard in their race to reach the podium. They established themselves in third behind Australia and the Netherlands, who went on to take gold and silver. But this position only held to half way, as New Zealand drove past the Irish. The advantage had gone, and it became a battle for bronze between New Zealand, the United States and Ireland. The women in green won that fight through a better finish – they came strong when it mattered and secured the fourth podium finish of the day for Ireland.

The bronze in the lightweight women’s double came in a race in which Lydia Heaphy and Margaret Cremen featured a wonderful start and a photo finish. They bounced off the start, rating 53 strokes per minute. They then belied the expectation of their outside lane by pushing into and holding second behind Mary Reckford and Michelle Sechser of the United States down the course. China challenged them and passed them, and then Australia did the same. But Heaphy and Cremen pushed again. Australia just held on to second, with Ireland pipping China for bronze.

On Saturday, Fintan McCarthy had taken silver in the lightweight single and Katie O’Brien gold in the PR2 single. However, the PR2 mixed double, in which O’Brien teamed up with Steven McGowan, could not get beyond fourth on Sunday. In the hot weather it was quite a challenge for O’Brien, who set a new World Best Time on the evening before.

At Henley Women’s Regatta, Cliodhna Nolan of NUIG reached the final of the Championship Lightweight Single. She was beaten by 2½ lengths by Olivia Bates of Notts County RA in a good time of 5:36.6. The regatta is run over 1500 metres.

Roisin Merz of Shandon made her bow at the semi-final stage on Sunday as did the eights from Enniskillen and NUIG.