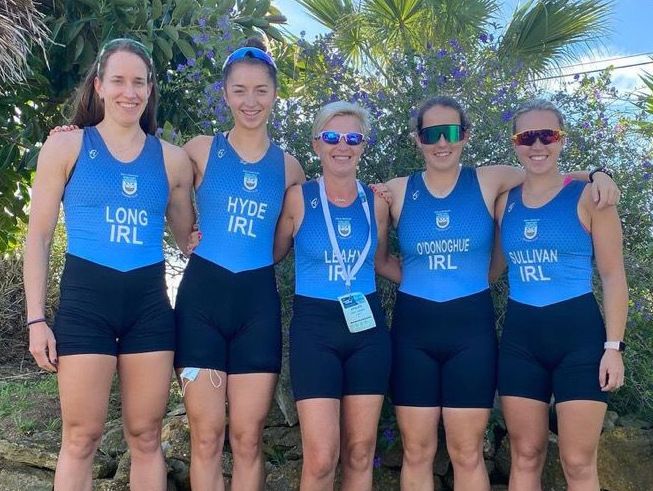 Ireland qualified multiple crews for A Finals at the World Rowing Coastal Championships at Oeiras in Portugal today, but there were a few disappointments. Monika Dukarska, a former gold medallist in the women’s solo, did not make it through after a collision.

In the women’s coxed quad, two Ireland crews qualified for the A Final from one heat: Killorglin (pictured) and Castletownshend took third and ninth places. Castletownbere’s 11th placing took them into the B Final.

Cairndhu’s seventh placing in their heat also saw them into the A Final, while Passagewest are set for a B Final after taking 17th.

Arklow’s Sionna Healy and Castletownbere’s Miriam Sheehan, through fourth and fifth placings, booked their spots in the A Final of the women’s solo, but Dukarska missed out as she did not finish due to a collision. Arklow’s Xena Jordan also made it to the solo A Final, placing 4th in her heat, as did Galley Flash’s Niamh Hayes, through placing 9th.

Three men’s doubles missed out on chances to qualify for A Finals: Arklow, who were 12th in their heat, did make the B Final, but Killurin/Kilmacsimon (17th) and St Michael’s, Dun Laoghaire (20th in their heat, after a penalty) made their exit.

Ireland have more chances to make A Finals on Friday.