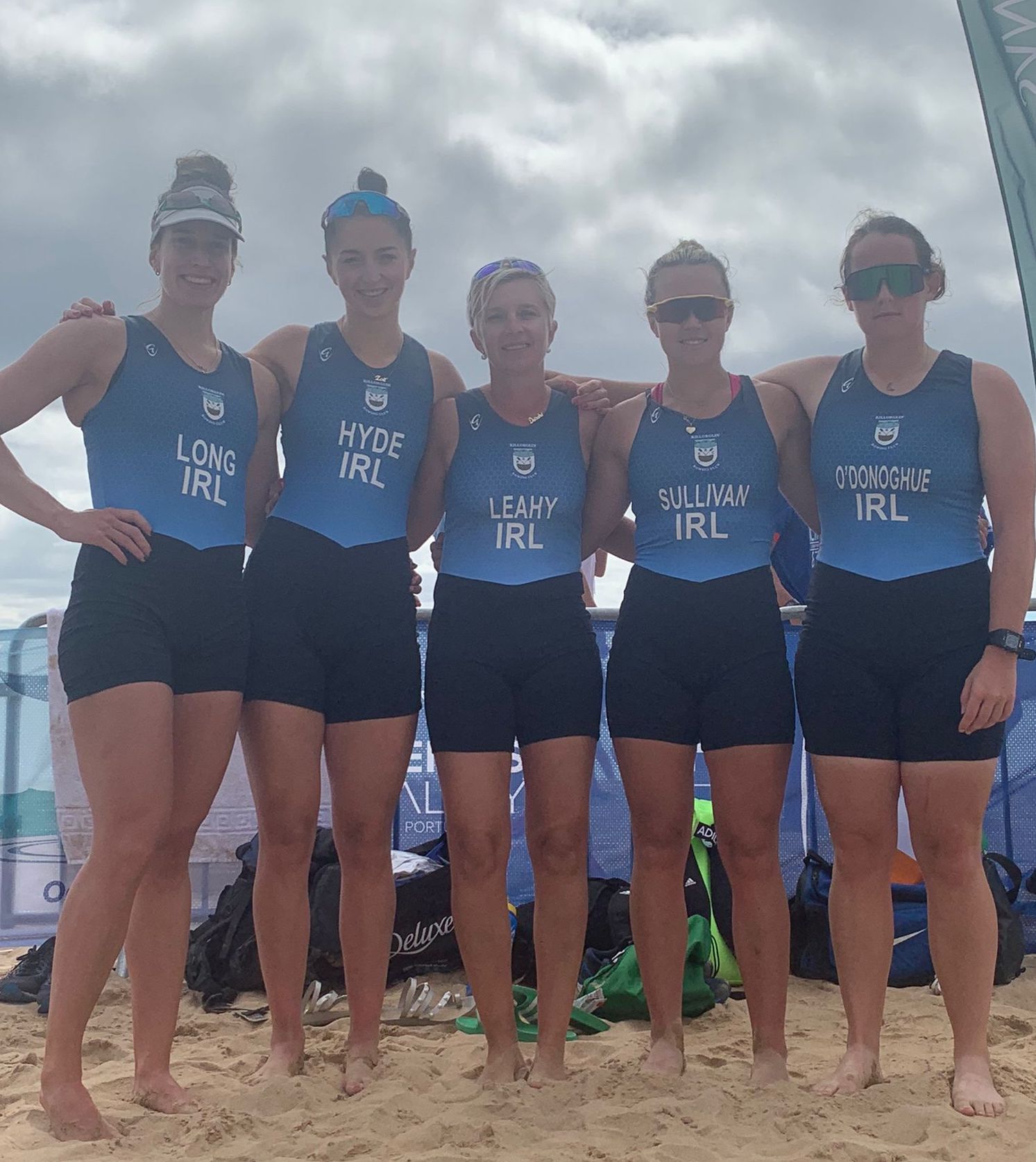 Ireland qualified 14 crews for A Finals at the World Rowing Coastal Championships in Oeiras in Portugal today, but came up short of taking a medal.
The pattern of the A Finals was set early: the strong tide pushed boats to the right of the first buoy – those crews which overcame this and got cleanly around this mark would figure in the medals.
The best placing was won by Killorglin’s young crew of Natalie Long, Zoe Hyde, Deirdre Leahy, Molly Sullivan and Rhiannon O’Donogue (pictured), who finished fourth.
Ukraine would win three gold medals on the day and in this race they commanded the – disruptive – waves from early on and came home first. The Killorglin crew were part of four-boat breakaway from the first turn at one kilometre, but they could not break out of fourth. The Kerry crew finished well, and were just 18.66 seconds off the bronze medal placing.
The women’s solo was notable from Ireland’s perspective because four Ireland crews all competed well. A group of five leaders formed, with defending champion Diana Dymchenko of Ukraine leading and looking good for the win. But Stefania Gobbi of Italy had other ideas. She passed the leader and went on to win well, from her.
Sionna Healy of Arklow was the leading Irish contender. She got a good start and held on to the leading group right through, taking fifth. Miriam Sheehan was just two places further back, while Xena Jordan took 11th and Niamh Hayes 18th.
The very difficult conditions had a major part to play in the men’s solo. Kealan Mannix would take 10th in a race in which the reigning champion Adrian Miramon Quiroga fell in as the mess of boats pushed sideways by the tide coagulated at the first buoy. In an amazing turn, the Spaniard got back in and clawed his way to a bronze medal. Germany was second, while Spain’s Jaime Canalejo Pazos won.
The men’s coxed quadruple followed the set pattern: the crews which avoided the pileup at the first buoy were the ones in contention at the end. Ukraine and the Czech Republic went on to take gold and silver, but the Shandon/Portmagee combination did not come out in the top set. It would fight back to take eighth, while the St Patrick’s/Cairndhu crew came in at the back of the field, in 20th. Britain took the bronze.
The highest hopes of the Irish rested on the Killorglin/Shandon mixed double of Monika Dukarska and Ronan Byrne, but the best they could do was eighth place.
Spanish crews negotiated the pile-up at the start well, and took all three medal placings.