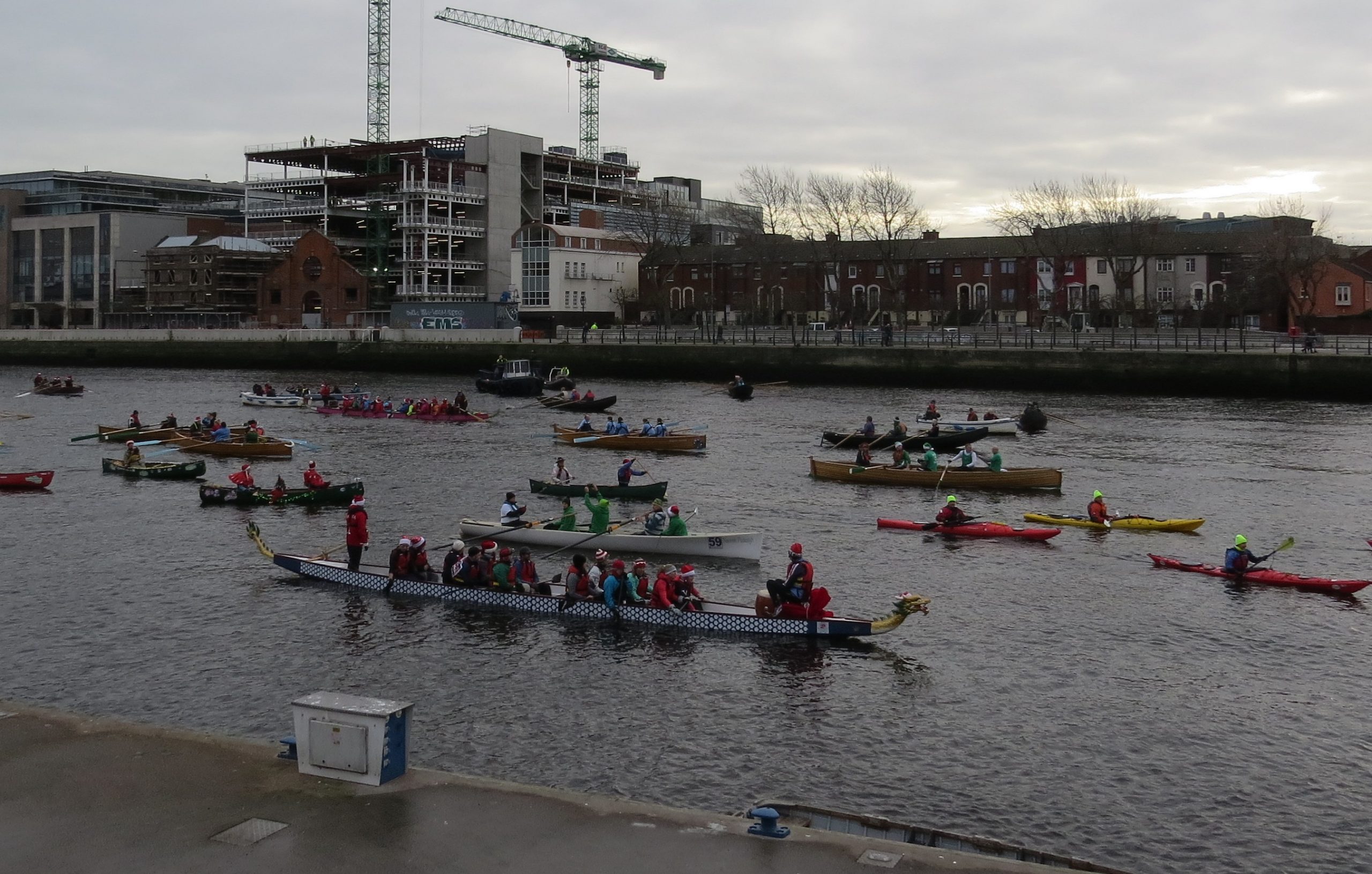 ‘All In A Row’ is coming back the River Liffey in Dublin on Saturday, December 11th. The 2021 version has set the participating teams the challenge of smashing a 1,000km target in eight hours.

Forty skiffs, kayaks, canoes and currachs will be on the water to raise funds for RNLI Lifeboats and the Irish Underwater Search and Recovery Unit. The organisers hope to exceed last year’s target of covering 1,000km.

The event will start at St. Patrick’s Rowing Club at the Tom Clarke Bridge (formerly the East Link Bridge) and go up to the Ha’penny Bridge. The challenge is being undertaken with the aim of showcasing the River Liffey as one of Dublin’s best amenities, while raising funds for two water-related charities, RNLI Lifeboats and the Irish Underwater Search and Recovery Unit. The event raised €15,000 in 2019.

Boats will set off first at 9am and at 1pm all boats will gather on the Liffey at the Sean O’Casey footbridge. A wreath-laying ceremony, attended by the Lord Mayor of Dublin, Alison Gilliland, will take place to commemorate all those who have lost their lives through drowning.

The Lord Mayor wished the event well. “The River Liffey is such an important part of the city of Dublin and it is wonderful to see so many people using and enjoying the river in a range of skiffs, kayaks, canoes and currachs. Best of luck to all those taking part and well done for rising to the challenge of rowing 1,000 km, showcasing our beautiful river and raising money for two great water related charities, RNLI Lifeboats and the Irish Underwater Search and Recovery Unit.”

Competitors are asked to raise sponsorship for the event, and also for spectators and supporters, there is a GoFundMe page for donations: https://www.gofundme.com/all-in-a-row-2021/donate

When people go missing on rivers, canals, lakes or around Ireland’s coast they require specialist equipment and personnel to bring them home. IUSRU is made up of a dedicated team of volunteers whose objective is to search for missing people underwater and recover them for their families and friends so they can be given a dignified resting place.

IUSRU is a charity registered in the Republic of Ireland under charity number, CHY20132.

RNLI Lifeboats is the charity that saves lives at sea and on inland waters. The RNLI’s volunteers operate a 24-hour search and rescue operation 100 nautical miles out from the coast of Ireland and the UK. There are 46 lifeboat stations in Ireland, four of which are inland at Carrybridge, Enniskillen, Lough Ree and Lough Derg. There are three lifeboat stations in Dublin at Howth, Dun Laoghaire and Skerries. In 2020, Irish lifeboats launched 945 times bringing 1,147 people to safety. The charity’s vision is to end preventable loss of life at sea. Ninety-five per cent of the RNLI’s people are volunteers. In Ireland there are approximately 1,000 volunteer lifeboat crew, and over 2,000 volunteer community fundraisers as well as many other dedicated volunteers who raise awareness, give safety advice and help out in shops and offices.

Charity Number 20003326 in the Republic of Ireland