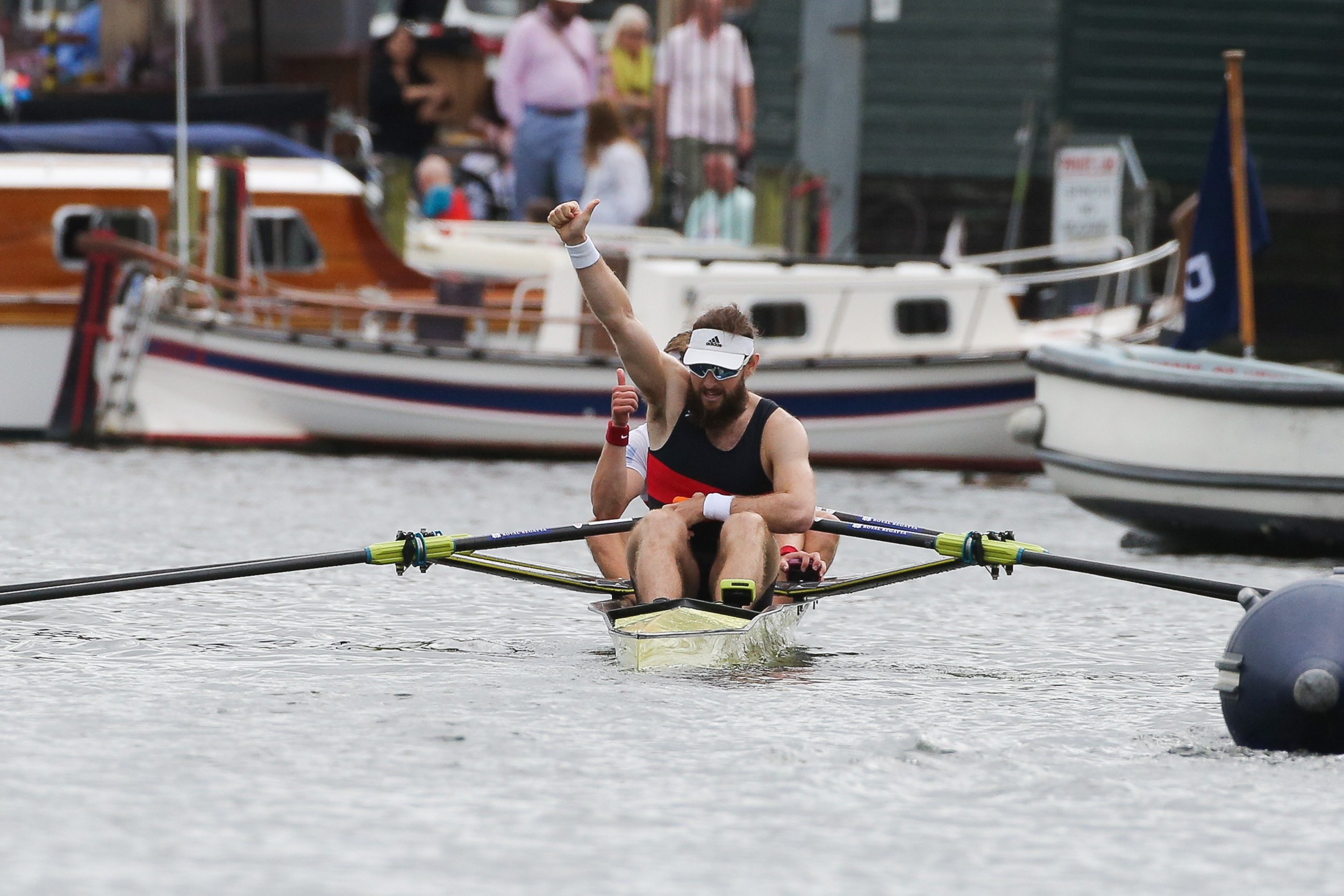 Yes, it seems winning is better than not winning. Paul O’Donovan has put in the thousands of hours of effort to become one of the greatest rowers in the world, so we suspect that he felt that all along. Today at Henley Royal Regatta, O’Donovan and Fintan McCarthy added the Double Sculls title to the Olympic Gold they won at Tokyo.

Matt Haywood and Sam Meijer did not row badly and they led through the early stages. But as another great, Olaf Tufte, said: coming out on top in rowing is about having the greatest mean speed over the distance.

Paul O’Donovan and the crews he rows in embody this saw. The UCC/Skibbereen crew were behind early, but they relentlessly powered on. They caught and passed their rivals and still they kept the rate and speed up. By the end of the 2112 metres they had one and three-quarter lengths to spare over the beaten double from Tideway Scullers and Nottingham RC (they salute them above: picture courtesy of Henley Royal Regatta).

O’Donovan said it felt “superb” to win. “The Olympics is in the past now. And as we’ve been banging on about all week, this is the highlight of our season,” he added. “I think we peaked on the day, fortunately.”

He said the standard of competition was good.

McCarthy said that the last few weeks “have just been unreal”. The win at Henley was the cherry on top of the Olympic win. “It’s been a really good few weeks.”

O’Donovan said they would be happy to come back to Henley “as often as ye’ll have us”.

O’Donovan’s last outing at Henley was in in 2018, when he partnered his brother Gary – they lost in the final, sparking Paul’s joke this time out about winning being better.

Gary stroked a Queen Mother quadruple this year, teaming up with Philip Doyle and Ronan Byrne, who represented Ireland in the double sculls at the Olympic Games, and Daire Lynch, who had a good run in the single scull this year.

They came up against three of the men who were Tokyo Olympic silver medallists.

The Leander crew took a lead of one length. It was eaten into by the Irish, but the British broke clear and won by one and a half lengths.

Leander had quite a day, and in a number of races the men and women in pink dashed Irish hopes.

There was no joy for Ireland rower Claire Feerick in the Princess Grace – although the defeat for the Neptune oarswoman came in a really good race. After a very close 1,000 metres, the Thames/Neptune crew with Feerick in the bow looked on course to beat Leander as they fashioned a quarter length lead. But Leander were constantly watching – as they said later, they knew that this was coming. They covered the move and then clawed their way clear stroke by stroke as the boats went past the enclosures. They won by one length.

Nathan Hull of Queen’s and his Twickenham crewmates in the Prince of Wales for men’s quadruples also fell to Leander, by one and a half lengths.

Leander also saw off Oxford Brookes/Queen’s University in the Remenham, the competition for women’s open eights. Fiona Bell, a Scot, was the Queen’s University rower. The four woman the Leander boat was Holly Nixon, long a British international. However, the Enniskillen woman holds an important place in Irish rowing history. Ten years ago, she took a silver medal in the World Junior Championships – the first time Ireland had a podium finish in the event.

Today, in far away Plovdiv, Holly Davis and Rachel Bradley also mounted the podium, after taking bronze in the junior women’s double.