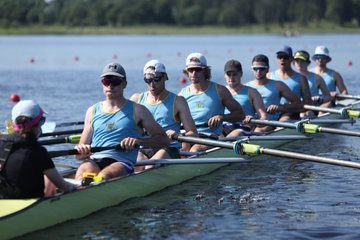 UCD were big winners at the Irish University Championships at Lough Rinn today. Their top men’s eight won the senior title – by clear water – from the second UCD crew, with University of Limerick third. They also won the men’s intermediate and club eights, ensuring they took the Wylie Cup.
The UCD women also had a clean sweep in the eights. Their seniors had a clear water win from NUIG, and they also took the club and intermediate eights.
Ross Corrigan of Queen’s University won the senior single sculls. Corrigan took silver in the green of Ireland at the World Under-23 Championships last weekend. Hugh Moore, who also competed in Racice, won the intermediate single for Queen’s.
The regatta was held on a very warm day.
Picture courtesy of Mark Kelly, @thewateredge